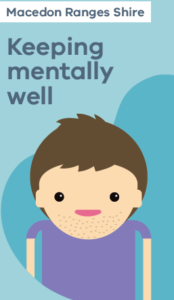 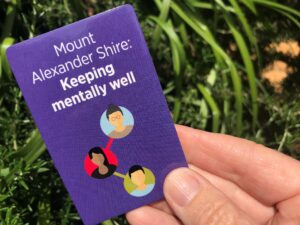 These great new resources have hit the streets in their respective Shires with the aim of getting them into the hands of those that need extra support, particularly over the festive season and into the planned reduction of jobkeeper/jobseeker payments.  The resources offer tips on how to look after your mental health and wellbeing, and where to seek help if you or someone else you know needs it. Keep an eye out in local businesses for these resources, but in the meantime online versions are available by clicking on each of the images above.

Mental illness is one of Australia’s top leading causes of disease burden and the largest contributor to the disability burden in Victoria. It is estimated that mental illness costs the Victorian economy $5.4 billion/year.

Data from the National Coronial Information System showed high rates of suicide across the catchment, well above the Australian average. Other available evidence tells us that some communities within the CVPCP have high rates of people with depression, anxiety and mental and behavioural problems in the general population.

What the data is telling us