Suicide is a national tragedy that has a devastating impact on individuals, families and communities, an impact not always obvious or recognised. People from all ages and from all walks of life take their own life and the causes appear to be a complex mix of adverse life events, social and geographical isolation, cultural and family background and supports, socio-economic disadvantage, genetic makeup, mental and physical health, coping skills and resilience.

Sub-population groups that are at higher risk of suicide include Indigenous Australians, men, young people, gay, lesbian, bisexual, transgender and intersex communities, those bereaved by suicide and those living with mental health disorders and people living in rural areas.

Suicide is the leading cause of death for Australians aged between 15 and 44 . For every person who dies from suicide, it is thought at least another 20 people attempt to take their lives.  Suicide is also the leading cause of death for people seriously affected by mental illness. Up to one in 10 people affected by mental illness will die by suicide.

The National Coronial Information System showed high rates of suicide in the Macedon Ranges and Mount Alexander, well above the Australian average. Other available evidence tells us that some communities within the CVPCP have high rates of people with depression, anxiety and mental and behavioural problems in the general population.

This project uses a place-based approach to increase awareness of suicide and improve community capacity to look after themselves and others. A report, video and case study are available to share the learnings of this project. 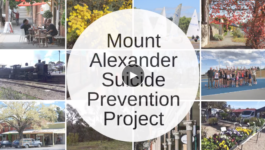 Macedon Ranges Suicide Prevention Action Group  (MRSPAG) is made up of community members with lived experience and representatives from local service providers who work together to prevent suicide in the Macedon Ranges. They have been progressing this work since 2012.

Summary of the Suicide prevention work in Macedon Ranges 2018-2020

From 1 April, 2022, Central Victorian Primary Care Partnership is transitioning to join the Loddon Mallee Public Health Unit (LPHU) and forge a strong future as part of the Loddon Mallee Health Network. The LPHU is managed by Bendigo Health as lead member of the Network.

The change is in line with a Victorian Department of Health intention to support, strengthen and grow the contemporarypublic health system and improve public health outcomes for local communities by consolidating skills, knowledge and governance across a catchment area and formalise partnerships within the local area.

Fellow Primary Care Partnerships in the Northern Mallee, Southern Mallee, Bendigo Loddon and Campaspe regions will also come together as a part of the transition to the Loddon Mallee Public Health Unit.

From April 1st, 2022 we will be known as the Central Victorian Prevention and Population Health Team at the Loddon Mallee Public Health Unit. While the Central Victorian PCP as an entity will no longer exist, our key staff and their vital role in the community’s prevention and public health space will continue and be strengthened by the integration with other regional public health functions.

We ask for your patience and understanding in the weeks leading up to and following the formal transition date as we work through the practicalities of the new arrangement.